During inhalation, oxygen passes from onto your nose to the lungs, by several cavities, tubes, and openings. Air or oxygen paths through the Nostrils, Nasal Cavities, Pharynx, Epiglottis, and the Larynx -the Upper Respiratory Tract – then Trachea, Bronchi (left and right bronchus), Bronchioles(compact tubes known as bronchioles), countless tiny oxygen sacs known as alveoli, and the 2 Lungs- Lower Respiratory Tract-. Within the alveoli, oxygen is soaked up from air inhaled and moves into the system to be distributed across the body. 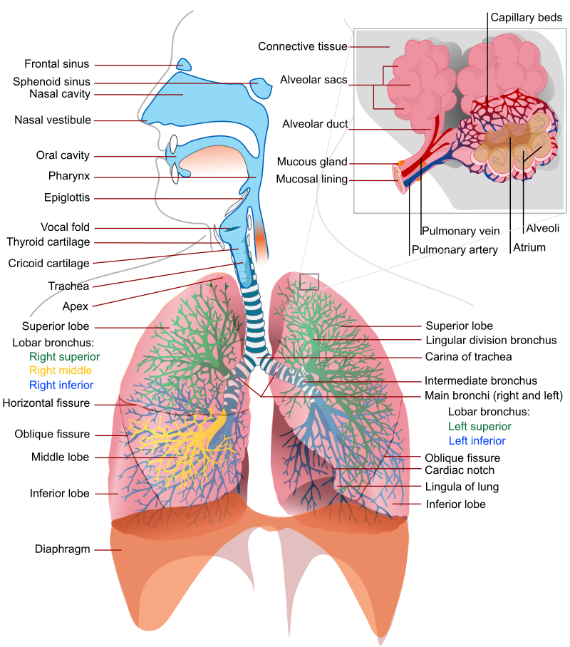 Is mesothelioma a type of lung cancer?
Pleural mesothelioma and lung cancer are two separate types of lungs and chest cancer caused by asbestos exposure but originate in different locations. When asbestos is inhaled it is trapped in the lungs can cause cancer in two locations either in the in the lining of the lungs or in the lung tissue itself. Asbestos trapped in lung tissue causes lung cancer, while asbestos trapped in the pleural lining- mesothelium causes mesothelioma -pleural mesothelioma. Both cancers affect the lungs and chest cause similar symptoms like chest pain and reducing lung function. Hence, it is common for mesothelioma to be mistaken for lung cancer at first but with patient history, using several diagnose tools and techniques the diagnosis is confirmed or not and according treatment plans differ for both cases.
What type of lung cancer is caused by asbestos?
Asbestos may be exposed in a workplace, communities, or homes, this exposure causes man health risk such as Asbestos lung cancer which is a rare type of lung cancer and mesotheliomas another rare type of cancer both are common cause of cancer death in the United States.
Other risks may be included such as an inflammatory condition affecting the lungs called asbestosis. Asbestos exposure may also increase the risk of nonmalignant lung, pleural disorders and pleural thickening. Sadly knowing; that people with pleural disease caused by asbestos exposure are risk for lung cancer. Death related to lung cancer is about 4 percent of all U.S. fatalities
What are the causes and symptoms of mesothelioma?
Mesothelioma is an aggressive cancer caused by asbestos exposure, the only known cause for this type of cancer. Most people who work in jobs related to asbestos have the risk of breathing asbestos fibers. Restrictions on asbestos were not instituted on these occupational jobs nor were any occupational safety was followed. Household environment are another type of exposed people often without knowing it. Because mesothelioma needs decays to be manifested on people’s health – a latency period – there is continues rise of the number of new cases of mesothelioma each year.
When asbestos fibers are inhaled and trapped in-between the lining of the lung, it can cause excess fluid to build up between the two layers of the mesothelium tissue – the pleura- the condition is called pleural effusion. Naturally there is little fluid in the pleural space for lubrication and protection reasons, but pleural effusion or too much fluid cause breathing difficulties. This extra fluid puts pressure on the lungs, causing inability of the lung to do its normal movement and functions causing chest pain , this pain increases on coughing or taking deep breaths. Most people present with many other complaints such as shortness of breath, weight loss, decreased appetite, and night sweats . But some patients may be asymptomatic, and the disease is discovered accidentally while the patient is checking other symptoms of another disease using physical exam or an abnormal chest X-ray.
Is there a cure for mesothelioma?
While there is currently no cure for mesothelioma, there are three traditional kinds of treatment or more of these are combined in the course of treatment for patients with malignant mesothelioma. Many patients have had success in managing their cancer and a longer survival with these traditional treatments after what was an initially unfavorable prognosis; surgery (taking out the cancer, but that depends on many factors for example weather it was localized or not), radiation therapy (using high-dose X-rays are to kill cancer cells and shrink tumors), and chemotherapy (using drugs to fight or to kill cancer cells).